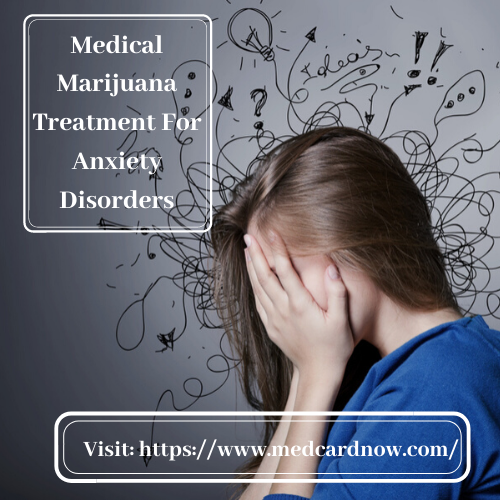 Medical Marijuana For Anxiety Disorders Treatment is a trend now. Marijuana is the most commonly used drug of abuse in the United States. As found in the 2015 National Survey on Drug Use and Health, 22.2 million people aged 12 and older had used marijuana in the past month. Research suggests that marijuana use has increased over the past decade as perceptions of risk of harm from using marijuana among adults in the general population have steadily declined. As of June 2017, 26 states and the District of Columbia have enacted laws that have legalized marijuana use in some form, and 3 additional states have recently passed measures permitting the use of medical marijuana. Mental health conditions figure prominently among the reasons given for medical marijuana use, yet there is a dearth of rigorous, experimentally controlled studies examining the effects of marijuana on mental health conditions. This research brief will summarize what is known about the effects of marijuana on anxiety disorders.

Medicinal Use of Marijuana for Anxiety

As of June 2017, anxiety is not specifically listed as a qualifying condition for a medical marijuana card in any of the states that allow for the medicinal use of marijuana. In a study of a sample of 1,746 patients from a network of nine medical marijuana evaluation clinics in California, 37.8% of patients reported that they used marijuana to relieve anxiety, 16.9% to relieve panic attacks, and 55.1% to improve relaxation. Anxiety/depression was identified by a physician as a reason for authorizing medicinal marijuana (MM) use on 13.0% of these patients’ MM patient ID cards. A recent study surveyed 1429 MM users recruited through social media and MM dispensaries from December 2013 to January 2016 in Washington State about the conditions they used MM to treat, use patterns, perceptions of efficacy, and physical and mental health. More than half (58.1%) reported they used MM for anxiety. In general, participants indicated that they felt MM improved their symptoms of anxiety.

In 2016, Walsh et al. reviewed the literature on the use of MM for anxiety and concluded that evidence from cross-sectional studies generally supported the anxiolytic effects of MM. The researchers identified 8 cross-sectional studies that reported anxiety reduction as a primary or secondary benefit of MM. One of these studies noted that retrospective reports indicated that symptoms of anxiety returned upon cessation of MM use. When considering marijuana for the treatment of anxiety disorders, it should be remembered that regular marijuana use would result in tolerance to medicinal effects, thus increasing the risk of rebound anxiety upon cessation and fostering cannabis dependence. To date, there have been no reported randomized controlled trials to show the sustained benefits of cannabis in the treatment of anxiety disorders.

Also, read our article on “14 Amazing Uses and Medical Benefits of Marijuana“

Relationship between Marijuana and Anxiety Disorders:

Among the anxiety disorders, social anxiety disorder (SAD) the one most associated with problematic marijuana use; SAD is correlated with marijuana dependence at rates more than twice that of other anxiety disorders, including generalized anxiety disorder, agoraphobia, and panic disorder. Buckner et al. examined the temporal relationship between SAD and cannabis use disorder (CUD) controlling for baseline CUD and other relevant variables including other anxiety disorders. Results indicated SAD may serve as a risk factor for subsequent cannabis dependence. The investigators suggested that their findings may indicate that individuals with SAD may be more likely to use marijuana to self-medicate anxiety reactions compared to individuals with other anxiety disorders. They point out that, for example, individuals with panic disorder have been found to avoid cannabis out of concern that the use of cannabis brings about a panic attack. A recent study indicated that psychiatric outpatients with comorbid SAD and CUD reported better physical health, fewer limitations due to physical health, and a trend toward better adolescent and current psychosocial functioning than did those with SAD alone. The researchers suggest that marijuana use may alleviate some SAD-related impairments in the short-term but also present an increased risk of harm in the long term, especially in terms of the likelihood of alcohol and other substance use disorders.

In summary, the effects of marijuana on anxiety disorders are complex. The endocannabinoid system appears to play an important role in responses to stress and anxiety. The two primary active ingredients of marijuana, THC, and CBD, appear to have different effects with regard to anxiety. Pure THC appears to decrease anxiety at lower doses and increase anxiety at higher doses. On the other hand, pure CBD appears to decrease anxiety at all doses that have been tested. There appears to be tolerance to these effects over a short period of time with regular use. There are individual differences in responses to marijuana that are affected by a variety of factors. Many people report using marijuana to cope with anxiety, and this may be particularly common among those with a social anxiety disorder. Those who are concerned about marijuana increasing anxiety are unlikely to use it whereas those who use it and find it to be beneficial presumably continue to use marijuana. Doing so may offer some benefit in the short term, at least in terms of anxiety, but well-controlled studies indicate that the use of marijuana is associated with an increased likelihood of substance use disorders in the future. (source: http://bit.ly/2Zx0ceu )

Get the card of Medical Marijuana For Anxiety Disorders Treatment: